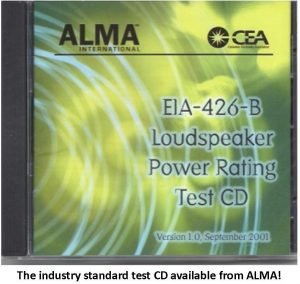 The CEA-426-B (formerly named EIA-426-B) Loudspeaker Power Rating Test CD was developed by leaders in the loudspeaker industry as a companion to the CEA-426-B (EIA-426-B) standard, “Loudspeakers, Optimum Amplifier Power (April 1998).” The CD contains the calibration and test signals for all the tests defined in the standard and outlines the procedures to make best use of the disk in setting power ratings of loudspeakers and the amplifiers that drive them. The CD is intended to improve the consistency and convenience of the standard.

*price includes US Postal delivery where possible. Orders from outside the US ad $30 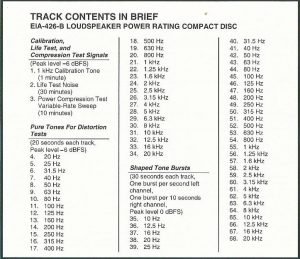 Orders are processed and shipped within 3 business days. We will send a confirmation along with your paid invoice.

The standard and the CD are 2 different entities. ALTI has no control over the standard.

The test standard itself may be purchased from either CEA or IHS.

The CEA-426-B (EIA-426-B) Test CD is owned and copyrighted by ALTI, however theCEA-426-B (EIA-426-B) Standard is owned and copyrighted by the Consumer electronics Association (CEA) and licensed to IHS/Global for distribution.  Unless you purchase a multi-user license, the document you purchase is a per user license.  The file is electronically locked to only be viewed on the computer it was originally opened on and only printed once.

Please note that since this CD was manufactured and re-named CEA-426-B R-2005 (ANSI), the change is in name only.  This CD is still appropriate for these tests.